Battle your friends on the high seas!

This is a sort of Battleships-inspired game my friend Ryan and I made for AirConsole. We wanted to make something fast, with the idea that spending too long on any particular project would be a mistake, and we wanted to see if you could make some money on AirConsole. On AirConsole you play a game with friends or AI using your phone as a controller and the game itself up on a monitor, so Ryan made the controller (I think with React) and I made the console part in Unity. The ships were made using Asset Forge, which did get the job done quickly but I also found it to be pretty buggy and annoying to work with.

Here it is on AirConsole!

Ryan did the graphics for the UI with sort of cold-war era theme: 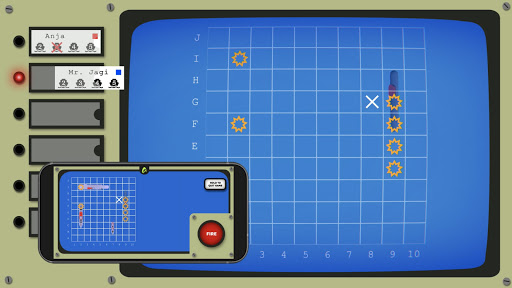 We had these little cut scenes whenever you sank a ship:

I think it's a cool game and was happy with how fast it came together, but also it probably takes a bit too long to play a game and could maybe use some more interesting gameplay elements to make you have to think a bit more. Over the past few years it's made something like $500, so not very lucrative but it requires basically no maintenance so that's nice.