By Oliver Smith, Thom May

Puncho Fighto is in Latte Town!

(This is a follow-up to my post-mortem on an iPhone/iPad fighting game I released in 2012. Here's the previous post, which talks about sales over the first few years, and here's another post on the making of the game. If you want to try it out, here's the link.)

At the start of this year and on the advice of the gamedev community on reddit, I put ads in Puncho Fighto and put it in the free tier on the iOS App Store. The game isn't very popular so I wasn't expecting much - mainly I wanted to learn how free-with-ads compares to cheap-with-no-ads, and it's pretty hard to find concrete information on how much you can make. Since all games and apps are different, that makes sense - you can't really know what the numbers will be like until you try. With ads, the main way you get paid in a low-traffic game is from users tapping on banners or full-screen interstitials - just showing an ad to a user might get you a fraction of a penny but it doesn't add up to much.

If you recall from my previous post, at $0.99 per sale my revenue was a little more than a dollar a day over 2014. I added AdMob banner ads to the single-player game and full-screen interstitials every three minutes between matches. I did it in my spare time over the Christmas holidays, and it took a week of messing around because I had to catch up with two years of iOS updates. Revenue after the release was nonexistent for the first few days, but then it picked up and over the first few months the average per-day revenue was around $3.80 - already a pretty decent improvement (percentage-wise, anyway). Also, the game was being played by a lot more people which is a big bonus when you're trying to make something people like - being free means about 80 new users per day for me.

More users means occasional randomness like this Portuguese review - I don't think he figured out how to do the swipe special moves. :)

After a few months I decided to try ad mediation, which is where you support multiple ad networks at once and try to show the ads that will make you the most money at any given time. If you already support AdMob and you want to show ads from Flurry as well, all you have to do is rebuild your code with the Flurry mediation adapter and give AdMob your Flurry credentials. AdMob will then try to show ads from the network that is offering the best revenue per click.

That's the theory, anyway - in practice I ran into some problems that caused all my ad networks other than AdMob to silently fail. After working with Google's support (who were really helpful) I did eventually get iAds working, but by then I had already spent more time than I wanted on it and decided to give up on the others. One major downside to mediation is that rather than getting one payment from AdMob, you get paid by each ad network individually. Since most networks don't pay you until you go over a certain amount, you need to be making at least a reasonable amount on each network for it to be worth it, or they get to keep all your sweet sweet bitcoins (on the internet money is called bitcoins).

After finally releasing a working update with iAd mediation working, something unexpected happened - interstitial revenue jumped by a lot, but not because of iAds. Somehow I must have unintentionally either fixed a bug or otherwise made something work that hadn't been working before. Since that release in late May, revenue has averaged slightly over $10/day - which is honestly way more than I was expecting when I started this experiment. Unfortunately, iAd revenue is not good and I think mediation at my level is not worth it due to the problem I mentioned above of spreading your payments out between multiple networks. I'm going to wait until iAd makes enough to give me a payout and then will most likely turn it off.

Here's my AdMob graph as of today, split on ad unit and showing USA and China which are my two highest-paying countries (after the interstitial fix, China is actually making me more money than USA): 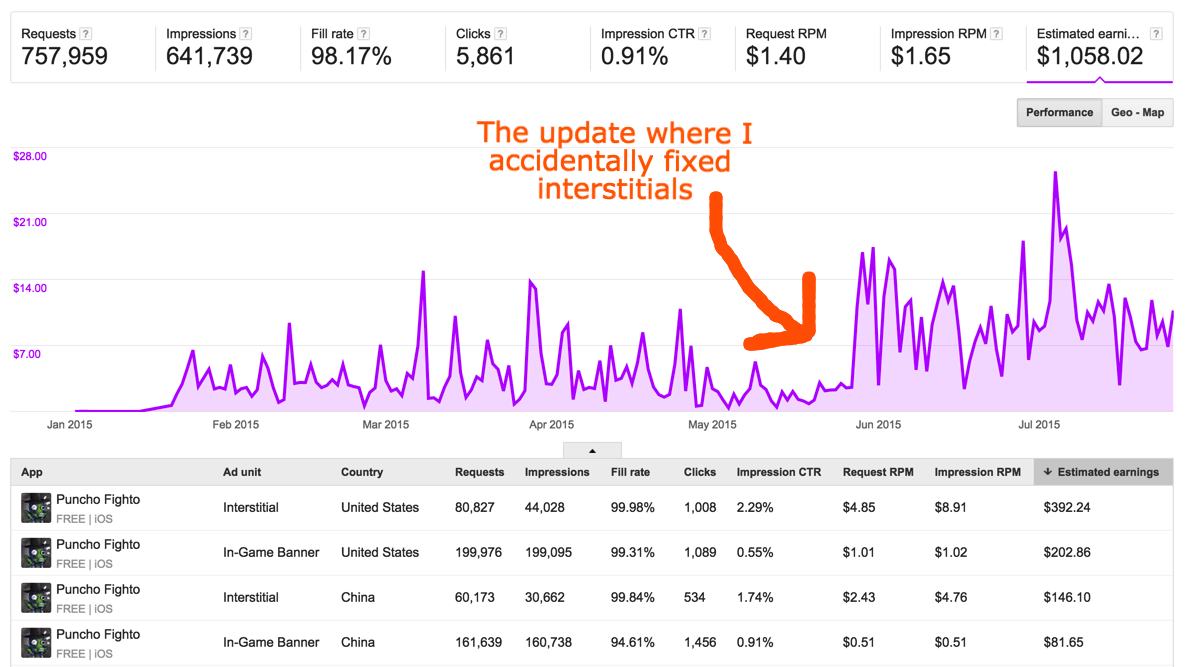 Implementing ads has been a big success for me. My game is being played by way more people and I'm making way more money (although to be fair, still nowhere near enough to support even a single developer). In the last 6 months with ads I've made $1058, which is as much money as the game made over its lifetime of 2.5 years in the $0.99 price tier. If the last two months hold up, Puncho could be making $3000/year. It's still not a lot of money, but for a 3-year-old game it's enough to be interesting - if I was starting out a mobile game now I would absolutely plan to release it for free with ads and reasonable in-app purchases. I would support Android as well as iOS, and plan to release early and often to get the user bumps that come with an update. I'd also do some marketing/networking. And plan to make multiple games - not just one big one. But that's all in hindsight. :)

If you're curious, I have an in-app purchase to remove all ads for $0.99 but almost nobody has bought it. I would also be careful about transferring this experience to non-mobile platforms where full-screen ads are not as viable and users may be willing to pay more than $0.99 for a game.